Just a quickie of some of the fantastic bass the lads have had of late....

This first one is well over 13lb & was taken off the top late October (hero Mark!) 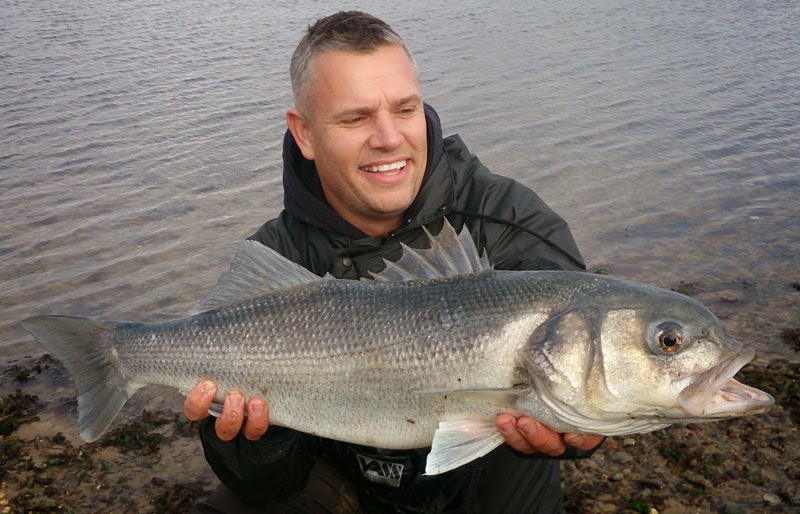 ﻿
Next up a pair of double plus fish from Richard (two 11+ lbers in under 3 hours to be precise.......shore bassing doesn't get better than this!). Very well done Richrd - you are the man!! 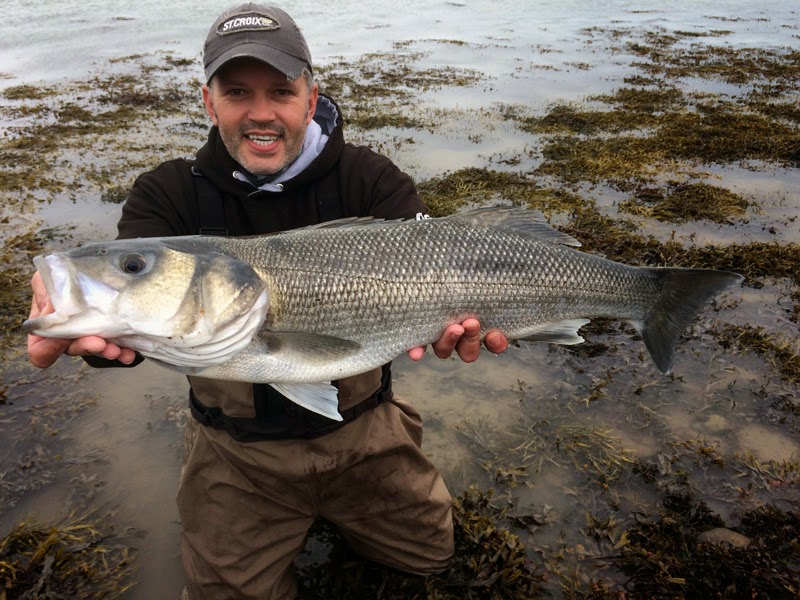 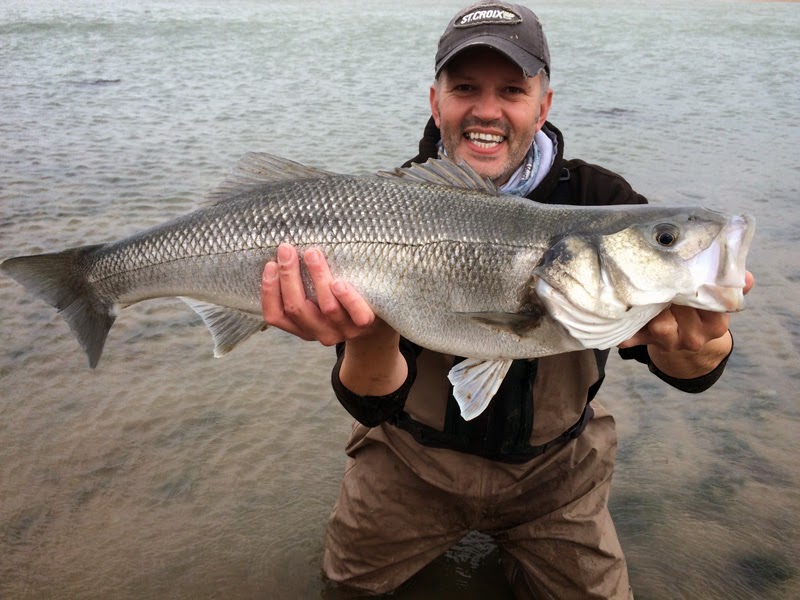 ﻿
﻿
Not only have the lads been doing some great shore work but have shown they can produce on the boat too - check these cracking fish.....(Joe with a beautiful boat bass). 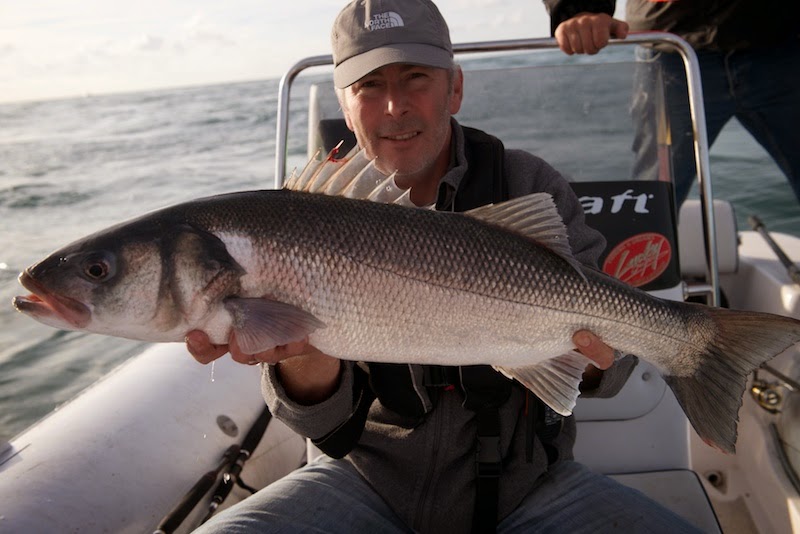 Email ThisBlogThis!Share to TwitterShare to FacebookShare to Pinterest
Labels: Bass

Just had this mail from Omar down under (top fishing fella!)


Check out this queenfish I caught yesterday late afternoon!!!! She smashed a live mullet that I had merrily working for me on the edge of a deep hole on the Don River. It was only in about 60cm of water. The tide comes sweeping up through the hole & up through a gap 50m wide out onto the sand flats. Purely tidal; at this time of the year there is no flow & the river drains fully on low tide.
When she took off, she headed back into the hole and ripped off 80m or so of 20lb braid. The Stella did as always, rock solid. Full on acrobatics, jumping many times clear of the water during the 15 mins it took to land.
Unfortunately, all the exertion had taken it out of her, there was no chance of a release here. Quickly dispatched with a strong jab behind the eye, bled & cleaned immediately so as to make sure the fish was best on the chew. Shared around the street. The walk from the point (Yasso Point, mouth of the Don) back to the car is only 600m or so, but with this beast, 2 rods, cast-net & bucket, I struggled indeed. Plenty of folk fishing for whiting & flathead along the way back.
Plenty of the same old question....... “F**K mate, did you’se get that here???” Awesome, buzzing as you can tell. The all-tackle record for queenfish is just over 17kg & 130cm. This measured 115cm & I would say around 14kg. They don’t get much bigger. I generally put big fish back, but like I said, this big girl was unlucky & wouldn’t have survived long even if I swam her for 15 mins in the croc infested waters......" 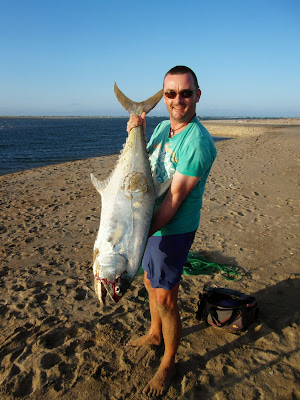 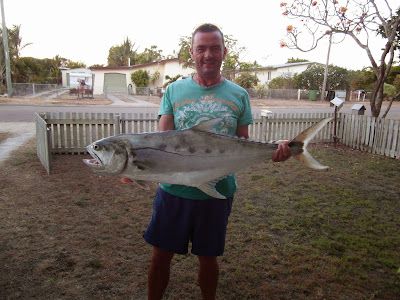 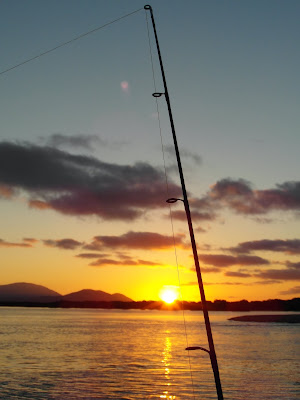 
G-Loomis GL2 LR905S (an awesome livebait rod, heavier than I usually use, but I had seen these big queenfish over the past few days feeding.) I just picked these up & they look pretty nice so I thought I would share. They are EFFZETT Rolling shads from DAM, 75mm & 11g.

Although I'm not a great fan of fishing shads, these may well work on a couple of spots I know and are well worth a try at least. 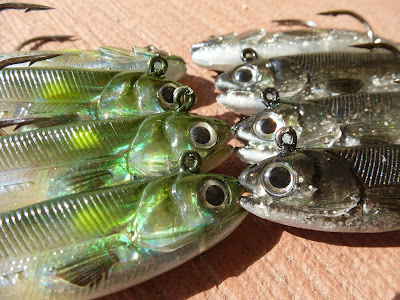 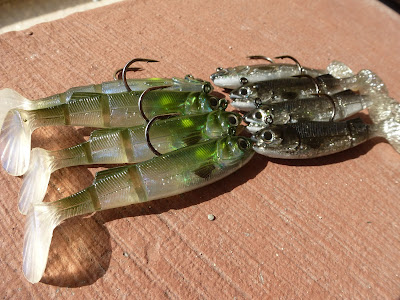 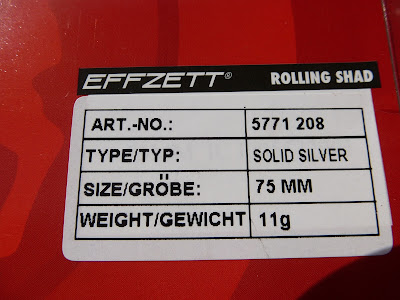 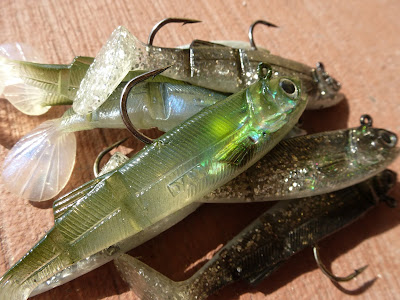 I hope to be back out fishing in a couple of weeks so I hope to give these softs a blast then.

I picked up a new topper for my box last week, which I hope will prove to be a catcher:

86mm & 13g in a pretty mullet pattern (the new smaller size Z-Claw "Phelps"). I think this little fella may fill the gap between a standard Z-Claw and some of my smaller toppers when the conditions are as calm as they have been recently (well that's the theory anyway). 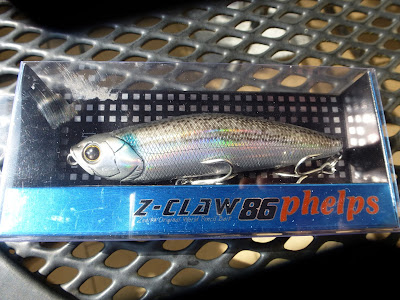 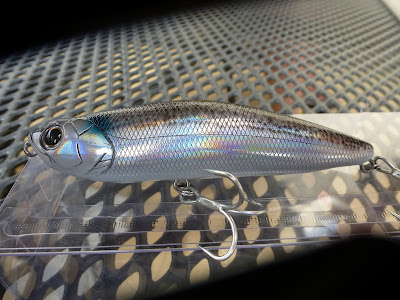 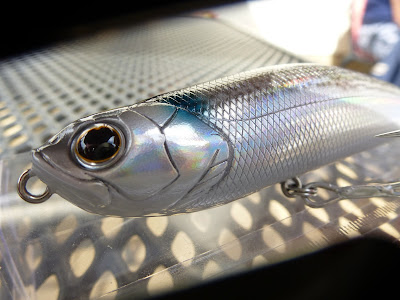 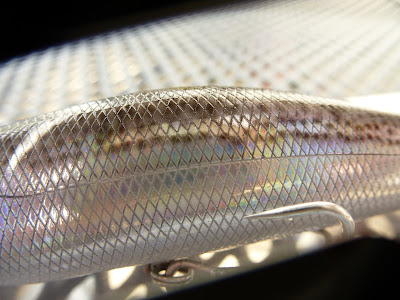 I picked mine up at Chesil Bait n Tackle ( http://chesilbaitntackle.co.uk/ ) - seriously nice people & a shop very well worth a visit if you are in the area.
I'm hoping to get another sneaky trip in this week to test out the "Phelps".
That's all folks......tightest lines.
Posted by Tom at 18:07 1 comment:

Just back in from a night down in Dorset where the conditions have been difficult of late (although there seems to be a good stamp of fish down that way with several biggies being caught.

The fishing was tough (no wind, weed etc.) but we managed 11 fish. I suspect if the conditions had been slightly different (note different & not necessarily better) we would have bagged up. 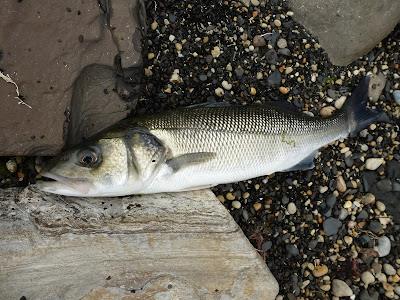 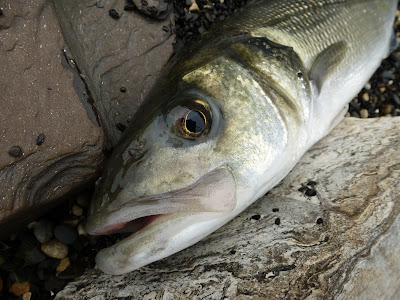 Not much else to report (but I hope to get out & land another fish or two later this week).

Just back from a week in Pembrokeshire, where the weather was great for a family holiday (not fantastic for bassing but you cant have it all...). The tides were small and as you can see in the pictures below, the water was very very clear, coupled with a lack of wind & water movement I knew I was up to a challenge.

I have to admit that I struggled the first couple of days, but when I did manage to locate them I did reasonably well with up to 13 fish in a session (up to 55cm so no real monsters). The fish I was catching seemed to be good little fighters & I even had some trebles and split rings trashed by the fish.


I managed to catch up with Ricky & Rhod while I was there (always fun), but to the end of the week the wind turned East & the fishing seemed to drop off.


Despite only having fished a few short sessions (trying to avoid that pesky sun) we had a fantastic family holiday to boot & fun was had by all.


I ended up just short of 30 fish (& took a Swiss bloke called Rico out, who managed to land 5 bass off the top on his first bass lure session ever - his face was priceless).

Anyway its good to be back catching bass (thanks for your patience to those who actually follow this blog).

Next weeks dilemma is going to be the choice of fishing Dorset or perhaps Pembrokeshire again - time for me to take a quick look at the weather & surf sites to try and make some sensible decision (which of course would be a first for me lol)......

Catch you all soon - tight lines.

A Happy New Year to All (hope the hangovers are mild & the fishing is good wherever you are).

As Xmas is over & done with I thought its time to post the winners on the Xmas give-aways. This year there were very few entries & the prizes will go to whoever was closest to the required post number.......

So the winners are:

If the winners post their addresses (I wont publish) the lures will be in the post very soon.

Apart from that here's a nice 90cm Barramundi that Omar caught a few days ago (well done fella!). 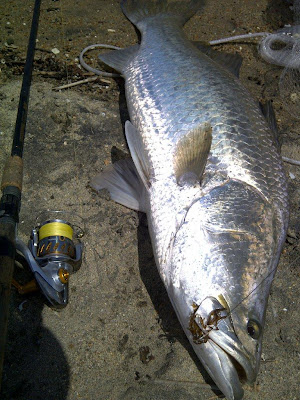 Best of luck with everyones 2013 season & especially good weather to fish in!

A first winner (on the Xmas give-away 4.)

We have a winner for the Feed Shallow that was up for grabs......well done Jaime!

The other give-aways are still up for grabs so get in there....

The last lure up for grabs is a Tackle House Feed Shallow in Pink Rainbow (or the "Poulet" as some call it but that's another story lol). 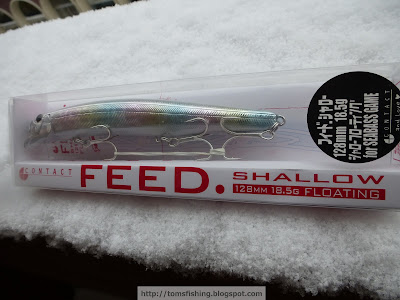 Q: Which company makes "The Patchinko"?

Win it by being the 3rd person with the correct answer in the comments box below. 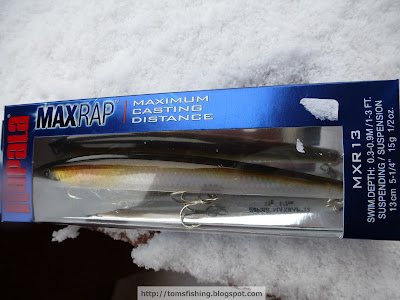 As usual the comments get posted on a winner....

The 9th correct answer wins (answer in the comment box please)....oh and one answer each please. 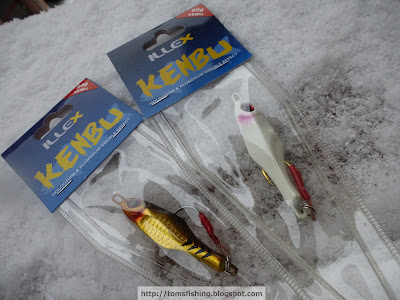 Q: Who manufactures "The Gunfish".

As last year I have a couple of lures up for grabs. Quite easy - just answer the simple question & with any luck youll be a winner (decider as last year is your comment number).

Anyway first up for grabs is.....a packet of Team Cormoran Slickworms in SB-5.The 5th person to provide the correct answer will win the softs (the comments will be published once a 5th correct answer).........as last year these will be sent to you by post free of charge. 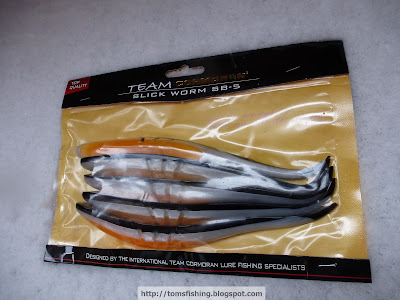 Q: Who manafactures "The Zonk" (now how easy is that?)

Answers below in the comments box (oh and one per person only & dont forget your name).


Good luck all (especially to those still fishing - brrrrrrrr)
Posted by Tom at 14:47 4 comments:

Over on TLF, I entered the annual team bass competition, and to my amazement our team is up there in second place at the moment. The competition is run each year & random teams of four are created with each person being able to enter their best fish (with photographic evidence against the TLF ruler).

Our team "2012 A Bass Odyssey" have submitted four fish for a current total of 263cm (giving an average of just under 66cms!), the leading team still has 11cm over us, so I'm guessing we will finish second unless someone below us takes a lunker or two).
Anyways I have been asked, if I will do another December giveaway as I did last year, so keep an eye on the blog in December (just in case - who knows you might get lucky).

Apart from that not too much to report (my fishing's done for this season), but I thought I would just post up the silly video below for your amusement.

Just back home from the usual poor fishing weather in the UK (what I had hoped would be 10 days of great Autumn bassing turned out to only be two whole days of tough fishing!)

I took a trip to Dorset where an East wind killed any real chance of bagging up big style but there were a few fish to be had but we really really had to work hard to catch. We did have a few as you can see below, (sorry about my poor editing to conceal the spot a bit) but certainly not as many as we would have liked. 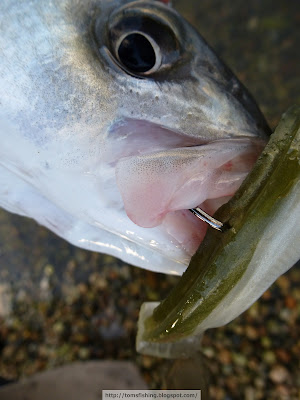 This next pictures a testimony to Joe's Simms G4 waders - despite getting this nice graze on his shin the G4 waders were only slightly scuffed on the top layer (Ive ruined cheaper waders in the past with way less barnacle scrape than that)......well done Simms!


I also had a wander to West Wales, got up at 03:30, did a 2 hour drive ------- and found dirty water where I had been expecting water like gin. After giving it a couple of hours I headed home & found this half a seal on the beach on the way back.


Anyways a bit disappointing despite having caught a half way decent fish (the boys headed over to Ireland & managed to pretty much blank there too but that's another story). 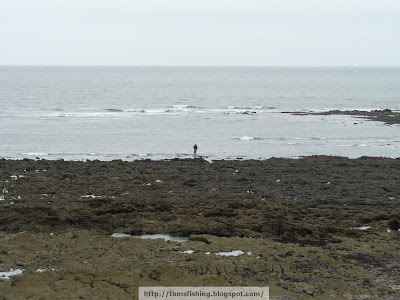 Now why don't I catch fish like that? lol.